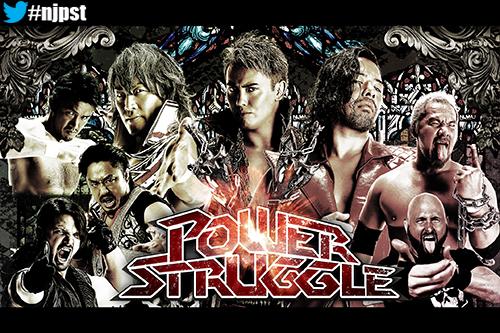 Power Struggle is being referred to as the final stop before WrestleKingdom 10, which is a lie. While Power Struggle has set up some major matches and teased other ones there is still World Tag League which will set up challengers for the tag titles and further tease upcoming matches and possible feuds. Here are the results.

The undercard started solid and built up to good. The opener ended the way you’d expect with the young lions losing to the vets. Bullet Club won their first match of the night but Togi Makabe was teamed with Captain new Japan and Juice Robinson so you kind of knew. In spite of predictable finishes both were alright. Not quite sure about EVIL-the repackaged Takaaki Watanabe but thought him and Goto were working a good match until the DQ finish thanks to Tetsuya Naito. Mixed feelings about that. Fascinating how over Naito is as a heel now, especially as there was much speculation about his future in NJPW. Once thought of as a future headliner Naito fell in status but the new heel gimmick has turned him into a a force. Goto’s sometimes partner Shibata came to the rescue-furthering these twos issues.

Then the Juniors. The losers of the tournament engaged in an eight man with the Bullet Club losing to the combined for Time Splitters and Jr. Tag champs reDragon. A very fun match that teased KUSHIDA getting a rematch against current Jr. Heavyweight champion Kenny Omega. I’m looking forward to that. The finals of the Junior Tag Tournament featured RPG Vice against Matt Sydall and Ricochet. Ricochet (or Prince Puma for you LU fans) is mad over in Japan and Sydall (former WWE Evan BOurne) is getting there. While a fun, action packed match, lacks the punch of the RPG Vice/reDRagon match. That match had more resonance but a fin closer. While this would push Ricochet/Sydall challenging for the Junior Tag titles it looks to set a multi team match as the former champs (the Young Bucks) feel they deserve a rematch plus RPG Vice beat the champs in the tournament and scored the first pinfall victory over said team since the debut at WrestleKingsom 9. I don’t like those matches but…

After intermission four more matches. Toru Yano and YOSHI-HASHI lost to Bullet Clubs Bad Luck Fale and AJ Styles. Okay for what it was. Next match up was Honma challenging Ishii for the NEVER title and it was titnaic. The third match these two had this year but only the second one I saw. This was a big match fight and could have headlined. Honma, the spirited fan favorite who always falls short fell short again but the fans want him. Sooner or later Honma will win something big in NJPW. Ishii is a beast and one of the baddest out there. Go out of your way to see this one. Now the question comes up-who faces Ishii at WestleKingdom 10. Makabe would be an easy choice but after their stretched out feud this year American fans want a rematch against Michael Elgin.

The co-headliner was IWGP Heavyweight champ Okaka teaming with MMA legend Sakuraba against title challenger Tanahashi teaming with MMA failure/NJPW fan favorite Shibata. Two things-the Sakuraba/Shibata stuff was excellent. The second is that the Okada/Tanahashi stuff is building excellently. These two fighting over Ace status is one of the great feuds I’ve sadly only bared witness to the last third. These two got into a brawl afterwards. Apparently Tanahasho crashed Okada’s post match comments with interviewers in the back.

The main event had star Shinsuke Nakamura take on Karl Anderson. Great opening stretch and great ending stretch. The middle was excellent. Not exactly a big Anderson fan and while Shinsuke had one of my fave matches of the year, was not happy with much since then. This was big fight. Anderson could hold the title if NJPW wanted-he is that over in Japan. Not as over as Nakamura though. This was definitely a great match. While not a favorite of the year definitely one of the best of the month. Overall a strong show with a couple standouts.

I like comics, wrestling, and other junk.
View all posts by CM Towns →
This entry was posted in njpw, wrestling. Bookmark the permalink.