In my effort to keep this blog updated more frequently this year than any other year, I’m going to talk about wrestling again. I don’t do it that often but figured I’m do it here. 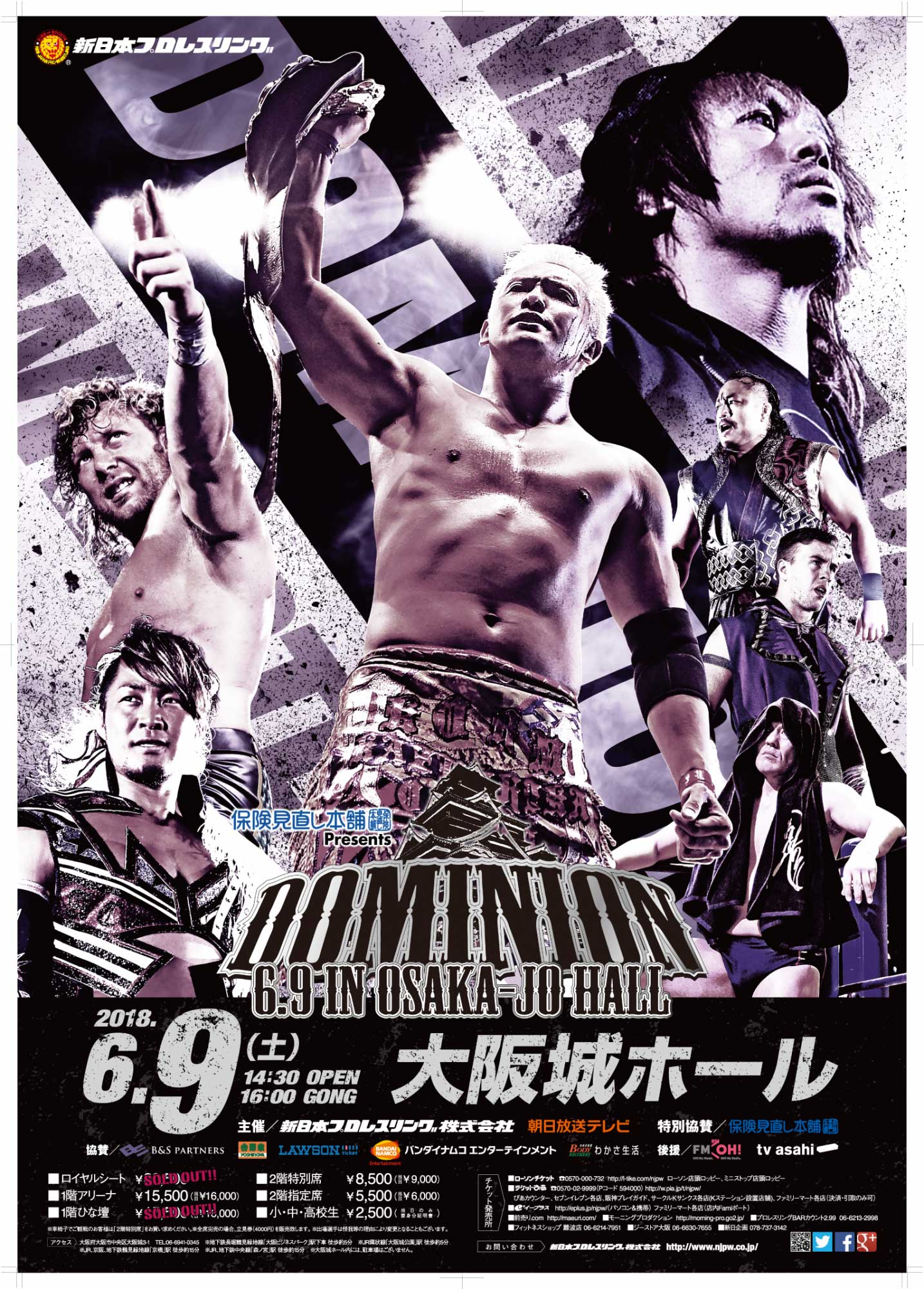 NJPW is the critically acclaimed, second largest wrestling promotion in the world. Dominion is their second biggest show of the year behind Wrestle Kingdom which is at the start of January. This is also the big show after their long running Best of Super Juniors (BOSJ) tournament and the major turning point of the year before G1 Climax tournament kicks off feuds that will lead into the new year. So a big show. Lets get into it.

I watched this from midnight to just before five am. I don’t normally watch live because I don’t want to but I’m getting tired of waking up after a big show and having big things spoiled before I have a chance to watch the VOD. This is only the third show I’ve streamed live since getting NJPWWorld account a few years back.

NJPW roster is broken into stables, some of which have aesthetics. Suzuki-Gun, named after wrestling/MMA legend Minoru Suzuki’s aesthetic is mean and win at all costs. Masked wrestler El desperado and veteran Kanemaru definitely live up to the “win at all costs” motto. RPGK are youngsters who are part of CHAOS. A stable with no aesthetic really. A strange mishmash of personalities but they have a lot of titles so it works. Now SHO and YOH are the ace tag team of junior heavyweight division since returning from excursion last year. Wrestlers trained in NJPW’s dojo system go over seas for a while to better grow. These two also got a new “sexy!” photobook out and everything. It was a surprise they lost here, really. They won singles matches against these guys in BOSJ tournament and are becoming fan faves. However the story is that they’re still young and have a lot to learn? The match was good. nice hot opener with a loud crowd. The junior division will be (mostly) put on ice after the brief Kizuna Road tour so that the company can focus on heavyweights.

Taguchi Japan is not really a stable. Pretty much everyone who was not part of a stable/team was called New Japan Army but junior star (and WWE’s Finn Balors old partner) Ryusuke Taguchi sort of stepped up as captain of everyone. Anyway Juice and Finlay (son of legendary Fit Finlay and a fourth generation wrestler) took on random CHAOS pairing of YOSHI-HASHI and US Champion Jay White. This was predictable as NJPW has a big San Francisco show coming up in July and speculation around White defending. So Juice pinned him, then made motions for the belt. That’s the only story here. This was skippable.

The odd thing about this, is all the gold is from a small British indy wrestling company called Revolution Pro. One of NJPW’s partners. So Suzuki and ZSJ are the RevPro tag champs and Ishii the RevPro Heavyweight champ, and he won that from ZSJ. Also, apparently Suzuki and Ishii are angry with each other. Suzuki is a legit guy, one of the founders of Japanese MMA. ZSJ is the best technician in pro-wrestling with too many damn holds. Ishii is a bruiser, tough as nails. Yano is a comedy wrestler and cheater. Caught up? Anyway, this was good. Suzuji and Ishii brought the mean. ZSJ countered a Yano low blow (strike to the balls) into an attack on Yano’s arm using his thighs.

NJPW does have too many titles. This one’s original purpose is forgotten and exists now for guys who are important enough to need direction. Goto (of CHAOS) is the NJPW bridesmaid, never going to be the top dude but in his role as gatekeeper (midcard guy who can beat top card guys and it doens’t hurt him to lose to lower card guys) he is great. Taichi (Suzuki-Gun) use to be a junior and is now heavyweight. he is a divisive figure. Not as divisive as Mike Elgin (not going to get into that garbage). Three way matches go wrong a lot because you have to account for the third person, especially in one fall to a finish match. This one over delivered, becoming real good. Goto was the fighting champion, Elgin was the power, and Taichi was the asshole trying to pick his spots. Crowd got into this one, they rarely get three way matches like this.

YB of Bullet Club (maybe?)/Elite (definitely) made the transition from junior division where they dominated to heavyweight division earlier this year. Basically it just means they were given the a-okay to switch divisions really. Now Bullet Club is NJPW’s most popular international brand. You’ve probably seen those shirts. LIJ is the most popular brand in Japan, which is actually based on a brand from Mexico’s CMLL which barely exists anymore. LIJ is the smallest stable with only 5 members, two juniors and three heavyweights. So this was a very good match. A lot of heavyweight tag matches are forgettable. Too much belt trading, too many multi-team matches. EVIL and SANADA were suppose to represent the company looking to rebuild with two popular midcard guys who are part of their most popular brand. Bucks however are the world traveled tag team masters so… yeah. They won the titles.

Cody (formerly Cody Rhodes, son of wrestling legend Dusty) is the (maybe?) current leader of BC, though he rarely works NJPW as he is contracted to NJPW partner Ring of Honor in the states. Still, he’s out for these big shows. So is his partners, though Mart Scurll was just in the BOSJ tournament, finishing third in his block. Their opponents is NJPW superstar Hiroshi Tanahashi, influential legend Jushin Thunder Liger, and lucha libre/WWE megastar Rey Mysterio Jr. This was good. Nothing much else to say about it.

BOSJ 25 winner Hiromu Takahashi gets his title shot against the champ a week after a grueling finals. Ospreay, the champ finished second in his block but has been havign an amazing year since winning the title in January. Background, Hiromu is LIJ. Punk look, crazy antics, almost childlike wonder. He is a company superstar. he lost the title a year ago and has been trying to get the belt back. So his path has crossed with ospreay’s multiple times before. Ospreay, repping CHAOS, won the title a second time in January in a four corners match that included Hiromu. Then beat Hiromu in his first defense of his second title reign. Ospreay has had an incredible year. Also, both guys are crazy and Ospreay almost broke his neck a few months ago.

This was dynamite. Aggressive, action packed, with moments that would make you cringe. These two are on top of their game and the crowd was behind Hiromu. Best match of the show in my opinion.

WWE, hell, wrestling fans in general know Chris Jericho. he worked in Japan early in his career but really we count this as his second NJPW match. His opponent, NJPW superstar and leader of LIJ, Tetsuya Naito. Naito portrays calm, apathetic but dynamic. This was mean, and scary. Naito had cuts around his eyes and was bleeding from his ear by the end of this. Jericho is wrestling unlike anything before. Might be his age, but he wrestles with such aggression and recklessness. This match had a few flubs but I felt a level of hate here that was intense. Surprise victor and WOW!

Leader of CHAOS, Okada is the ace of the company. He dethroned the former ace (Tanahashi). He’s broken most the records for the IWGP Heavyweight championship. Longest single title reign (4th reign at 720 days), most combined days (1516 days), and most successful title defenses in a single title reign (12). He’s just missing combined successful defenses. His 4th reign will be fondly remembered for the amount of classics its produced like against Katsuyori Shibata or Hiroshi Tanahashi and of course Kenny Omega. The once leader of Bullet Club, member of Being the Elite, and one half of the Golden Lover’s with Kota Ibushi. Omega won the 2016 G1 Climax and challenged Okada only to lose in a match that had the world buzzing. The two did it ago at least years Dominion but it ended in a draw. The two went at it a couple months later in G1 Climax tournament where Omega put the champ away.

Okada had to put away other people in that time but the thought of losing one match, of being 1-1-1 against Omega has gnawed at him. So after beating Tanahashi at Dontaku, he challenged Omega. No time limit. Omega raised the stakes, 2 out of 3 falls. Omega, since Dominion, won and lost the US title. Went to the finals of 2017 G1 Climax but lost to Naito. Fought off Jericho. Battled for control of BUllet Club against Cody. reunited with his former partner, rival, boyfriend Kota Ibushi. That leads here. Ibushi in his corner, Omega went about winning the title. A tense, long, brutal match. Okada taking the first fall with a roll up pin. Omega winning with his finisher the One Winged Angel. Then the third fall where Okada could not unleash a good Rainmaker lariat and cover. Omega fought through, finally dethroning Okada.

Now, I prefer their first match overall. But this was great.

Final Thoughts: Only one championship did not change hands. The only native Japanese with titles are juniors. This is a big deal. Anyway, top to bottom great show, one of the best wrestling cards of the year.